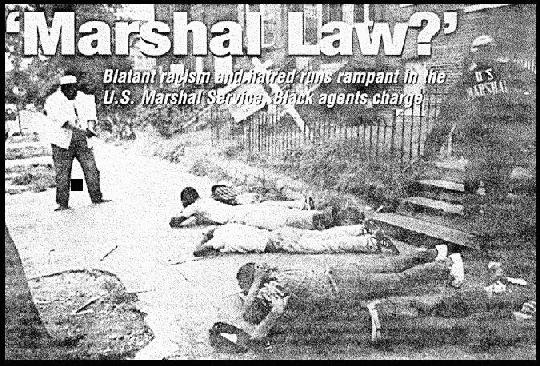 WASHINGTON--White U.S. Marshals joked about killing Black leaders, including the Honorable Minister Louis Farrakhan and New York activist Rev. Al Sharpton, according to a marshal who is spearheading a class action law suit charging the agency with blatant racism and discrimination.

According to the suit filed by Matthew Fogg, a Black U.S. Marshal, Blacks have been denied agency promotions, are not seriously recruited and suffer stiffer disciplinary actions than whites.

The agents contend their treatment may be the worst in the federal government. Discrimination reaches up to the highest level of management at the federal law enforcement agency, they charge.

Some of the allegations are so shocking they've grabbed the attention of senators, one of whom wants a congressional investigation.

"I believe its a clear pattern of widespread discrimination that is against African Americans," Mr. Fogg explained, in an interview with The Final Call.

"Back in 1978, when I came on board, they were making a so-called conservative effort to bring in minorities. I think there were seven Blacks in my class. Today, every one of the African Americans in that class have in some way been rooted out of the Marshal Service."

Black marshals have complained of everything from being denied promotions to being purposely left in life-threatening situations by white co-workers.

According to Mr. Fogg, in 1996, only 12 of 264 deputies hired were Black. Also according to a U.S. Marshals document, none of 21 officers recently promoted at the Marshal Service were Black, just two were Hispanic.

According to Black officers, once at a U.S. Marshal office in New Jersey, a white marshal put on a sheet and paraded around the office while harassing Black female employees. One Black female was so frightened she resigned, the officers said.

Starr Pickett, whose resume includes the U.S. Marines, the Department of Defense police, and a stint with the U.S. Bureau of Prisons, worked for the Marshal Service for 22 years. Mr. Pickett was forced to resign in 1992. Whites in powerful positions made it clear they "didn't want Blacks," he said.

Mr. Pickett said white superiors tried to discredit him, and once, a superior "assaulted" him. The superior was upset because as a union president Mr. Pickett assisted a Black marshal with a legal case against the agency.

"If I had hit a white man I'd be sitting in Leavenworth," Mr. Pickett said. Blacks are even given the worse cars to carry out their duties, Mr. Pickett noted.

Blacks never got promotions unless they "hung out" with whites and spied on fellow Blacks, he charged. Mr. Pickett now works as a private detective but has a discrimination complaint pending against the agency.

Ruth Worsley, a Black woman, works as a supervisory deputy marshal in New Jersey and knows the discrimination at the Marshal Service all too well. Ms. Worsley said she has been purposely left out of top level staff meetings and was among Black women in the room as a marshal paraded around in a sheet.

She has filed a discrimination lawsuit against the agency and is one of the 40 Black marshals included in the class action lawsuit.

Last year, 240 Black agents of the U.S. Bureau of Alcohol, Tobacco and Firearms (ATF) won a multi-million dollar lawsuit against the ATF for similar racial discrimination. Similar suits have been settled with Black FBI and Secret Service agents.

Even friendly white marshals were targeted by racists, Black agents charged. A white deputy in the agency's New York office was advised in writing by whites to stay away from Black marshals. When he begin to complain, he too was harassed.

During a meeting with the Marshal Director in Washington, the white officer said Blacks and other minorities were often referred to as "coons, n----r's, and spics," said Mr. Fogg.

The white officer also said he was called a "n----r lover," and often heard other white marshals boast of "going coon hunting tonight," meaning they were out to arrest Blacks. One white marshal, on a shooting range, used a photograph of Dr. Martin Luther King, Jr., as a target, Black agents said.

But the problem is deeper than pranks and promotions. Agent Fogg said he once told white officers under his charge to stake out a dangerous fugitive in Baltimore for an arrest. When the operation went down, Agent Fogg discovered the men had ignored his orders.

"I'm in Baltimore wrestling a fugitive with gun and they're in Washington" complaining about the assignment, Agent Fogg said.

The security breach was dangerous, other agents who joined the operation, but were unfamiliar with the case, could have been injured, he explained. The lax agents were not disciplined and one was later promoted, Mr. Fogg said.

According to Mr. Hampton, white control of the Marshal Service means they dictate anti-crime strategies and task forces. So in the inner city jumping out on children and "abuse of Black people" continues, he said.

Whites are just as involved in drugs as Blacks snatched up off street corners, Mr. Hampton noted. "It's just that whites don't sell drugs on the street, they sell drugs in their homes and on Wall Street. Well, the U.S. Marshal Service is not going to be busting in on Wall Street," he said.

Black marshals have sought help from Black leaders, congressional members and civil rights organizations as well as Congress and Justice Department, which has authority over the Marshal Service. New York Senator Alphonse D' Amato (R) has called for a federal probe of the charges.

A spokesperson for Congressional Black Caucus Chairwoman Maxine Waters (D-Calif.) said the lawmaker was unfamiliar with the complaints, but her office would look into the allegations.

Agent Fogg said the Justice Department may be part of the problem. When he presented his complaints to the department, it took seven years for an investigation to be completed, although, he insists, a federal statute says such probes should be completed in 180 days.

A spokesperson at the Justice Department could not confirm or deny how much time is required for such investigations.

Bill Dempsey, spokesman for the U.S. Marshal Service, said allegations of racism at the Marshal Service "are being blown out of proportion. We are not a racist organization." Minorities are 21 percent of the agency's workforce, Mr. Dempsey said.

The Marshal's Service is 79 percent white, according to agency statistics. Just under 12 percent of employees are Black.

Mr. Dempsey nor the Justice Department would discuss the discrimination cases because of ongoing litigation. Agent Fogg's civil case will be heard in a D.C. federal court in May.

Part of the problem is the fact that neither a Black nor any person of color has ever headed the U.S. Marshal Service, FBI, CIA or Secret Service, he said.

Racism is allowed to persist and over the past 10 years every federal law enforcement agency has been sued for discrimination, Mr. Branch added.

According to former Marshal Picket, the Marshal Service has to get rid of racist top management in Washington, who are hiding the agency's problem, and start fresh.

Agent Fogg chides the Justice Department for its slowness in resolving discrimination.